By orielbeer News No Comments

In a far away galaxy, in Bucharest, district 3

Once upon a time… No, I will not start again with this. In a far away galaxy, two guys started to brew beer. That was ten years ago, but that tale you all know. It’s not about the beers we brewed and it’s not about the years that passed, it’s just about the present time. Because we are all here and now.

This year was difficult to everyone, the pandemic crisis affected us and at some point we were asking ourselves, who cares about our beer nowadays, is it important to continue? But after reconsidering our thoughts, we were like “hell yeah! We bring joy into people’s life” or at least, that’s what we like to think about, because drinking an Oriel beer is an experience. We brewed from the beginning different beers, classic, like you all said, but special. Special, precisely because we focus on playing and adapting to modern times and even though we brew Belgian styles, they are quite different, right?

Last year we were getting ready to party for our anniversary and who knew at that time that things will get here? It’s funny because you never expect something to happen, life just happens without any notification.

A peculiar year 2020 was, but let’s looks at the bright side. Nature had almost an entire year to reboot, we had four seasons, spring, summer, autumn and now winter. When was the last time you looked around you? And thinking about this aspect of nature, we came up with the idea of a new beer specially brewed for our 3rd anniversary.

The surprise is that for the first time, we made an entirely different style, experimenting with everything, from malts, to yeasts and bacteria.

In a Far away galaxy is our reinterpretation of a historical English porter from the 18th century, a dark, funky and sour beer. Brewed with the finest ingredients with the Maris Otter as a base malt, a dash of smoked malt and other specialties, flakes, hops, this beer was sour kettled with Lactobaccilus Helveticus and fermented primary with WLP013. Second fermentation with Brettanomyces Claussenii lasted three months and after that, it continued the conditioning in the bottle. A complex bouquet is followed by layers of depth as the taste is changing over each sip. Roasted malts, tartness and earthy notes, funkness, dried grass, biscuits, praline, lemon, citrus, salt, mellow sweetness covered by smooth saltiness. 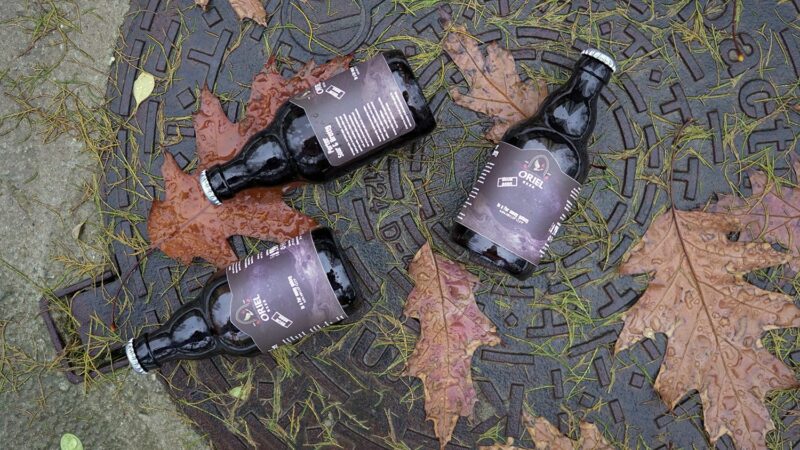 How does that sound?

We don’t want to bore you with details, but we need to share some info about bacteria and the yeasts that we used. Lactobacillus helveticus is a lactic-acid producing, rod-shaped bacterium of the genus Lactobacillus. Added in beer in the primary step after the mashing, this bacteria produces intense citrusy flavor. WLP013 London ale yeast has an oak ester character and adds up malt complexity, while the Brettanomyces Claussenii (anamorph of Dekkera claussenii) is a wild yeast of the genus Brettanomyces which has a negative Pasteur effect. It and Brettanomyces anomalus share identical mtDNA. In the wild, it is found on the skins of fruit. It has been shown to be useful for wine and beer fermentation as well as ethanol production.

And coming back to nature and making the connection, this beer is about that. Because bacteria and yeast are around us and we should be thankful for their amazing benefits.

Last but not least, we want to thank everyone for your support and for drinking our beers. Every order, every beer that you bought, it helped us to continue our work. We are not perfect, our beers are not either, sometimes we had issues with over carbonation or you may encountered faulty bottles, thank you for your understanding, we try our best and we are constantly improving. Each beer is hand crafted, hand labeled with our own hands and we will continue our work in brewing different beers for a better world. Because that moment when you will be drinking an Oriel beer it will be about you and your moment of delight.